Hard boiled detective, Doc Hunter is called in to solve the murder, or at least disappearance, of a Hollywood starlet. Possible suspects include her mother, her agent and his thug, her jealous husband, and a friend and rival.

The production was first produced by Port*Star Productions at the Baker’s Table in Portland, ME, as a murder-mystery dinner theatre offering in 1993. 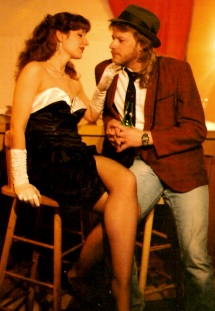