This play is set in a fictitious kingdom in the Alps. King Herendus has three wives and a son of marrying age. When he hears of a new princess who is available for marriage he sends his son out to hunt and decides to pursue the princess himself. Little does he know that a young traveler is also heading to her kingdom in search of her hand. Herendus decides to imprison the traveler when he is discovered passing through Yatata.

The story is filled with intrigue and inter-relationships involving such diverse characters as a Ghost who haunts the theatre and his poltergeist daughter who tries to disrupt his storytelling and attempts to play God, a fool who wanders into the plot only to become a priest, and a large muscular knight who is anything but slow witted. Each member of the royal court has their own unique talent. How will the twists, turns, and battles manifest? This one keeps you guessing until the final twist.

Yatata was first produced at the University of Bridgeport in Connecticut in 1983. It was later produced in Portland, ME at the Theatre of Fantasy in 1987. 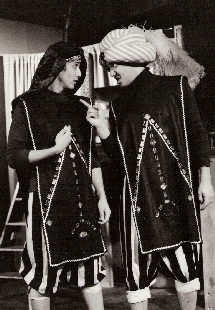