This play is the true story of the West Port Murders that took place in Edinburgh, Scotland in the late 1820s. Sometimes referred to as grave robbers, Burke and Hare actually murdered approximately 18 people and sold their bodies to medical science.

Other plays on the subject were written by James Birdie and Dylan Thomas; they focus on the doctor. This piece focuses on William Burke, a tragic anti-hero. William Hare and his wife are manipulating villains who seduce Burke and his common-law wife into committing murder for hire. These culprits, who spend their earnings on whiskey, have a human side that leads them to commit murder carelessly. Ultimately, after being betrayed by Hare, Burke hangs for the crimes of all four murderers.

The play can be performed by 7 men and 5 women with doubling.

It was first performed at the Oak Street Theater in Portland, Maine in January of 1993. The most recent production was staged at St. Andrews University in Laurinburg, NC in November 0f 2008. The play has been through several drafts and has received a number of readings and staged readings at the Playwrights Center in Minneapolis, Playwrights’ Round Table in Orlando, FL, the University Wits in Staunton, VA, and at the St. Andrews Writer’s Forum in Laurinburg, NC. 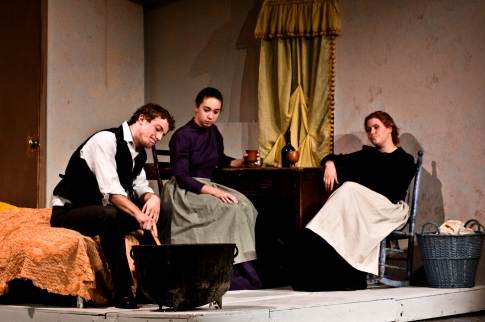