Commissioned and owned by The Orange County Regional History Center, this historic play is based on the real life events of Dr. Phillips, the citrus baron, and Lillie Stoats, the legendary rainmaker.

In the late 1930s, the citrus industry was under danger of collapse due to a prolonged drought. Desperate, yet with the foresight to try something new, Dr. Phillips invites Lillie Stoats from Mississippi to Orlando. She is a woman with a reputation for making it rain. Based on actual news stories in the Orlando Sentinel, the play follows the events surrounding the drought and the sudden
appearance of rain upon Ms. Stoats’ lakeside meditation.

It was first produced by the Orange County Regional History Center in Orlando in 2001. It has also been produced numerous times since. It was published in the periodical Its About Time in the fall of 2003. 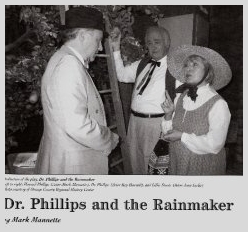