Artie is an 11- year-old boy who is dealing with bullies and all the other things a typical boy has to deal with at his school. At night, when he falls asleep, all the elements of his waking day weave themselves into a complex adventure in Dreamland. Guided by Merlin and a rhyming jester, Artie begins by cloud jumping and soon finds himself in the Mad Hatter’s hat shop invited for tea and mock turtle soup served in old shoes. Next, he is on a live chess board confronting his real life bullies, and then he winds up involved in a plot of the Big Bad Wolf’s to get the Three Little Pigs to the beach. Throughout the dream he is threatened by a looming volcanic eruption. In the course of his dream he learns courage and self determination that equip him to deal with his real life when he awakes.

Cast Size: 20-40 with doubling. It can be cast using all children or a mixture of adults and children. It runs a little over an hour.

The play was first produced by Lakewood Young Performers in Madison, ME in 1995
It was later produced by the Bay Street Players, in Eustis, FL in 1997. 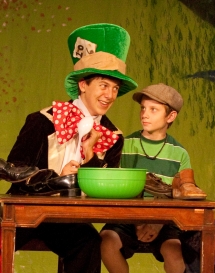